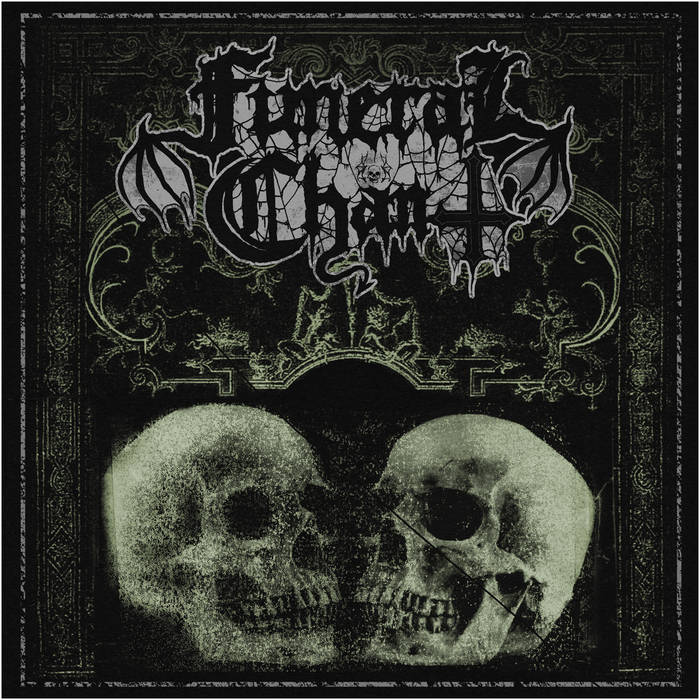 All music written by Funeral Chant in 2014 and 2015, except Morbid Ways by Repugnant.
Recorded by Justin Divver in 2016

"In the early weeks of this now-waning year the Oakland-based black/death band Funeral Chant self-released their first cacophonous chants of total death on tape and digitally. It took little time for that self-titled album to produce a clamoring in the unwashed hordes of the underground for a vinyl and a CD edition, and now those wishes are about to be granted...

The album consists of five original tracks and an explosive cover of Repugnant’s “Morbid Ways”. In its pure unchained violence and its raw, corrosive sound, the album strikes with shudderingly powerful force. The music’s rampaging pace rarely relents, and the feeling of wild, orgiastic abandon persists from beginning to end as well.

However, what really sets Funeral Chant apart from the throngs of bands perpetrating seething, murky, black/death metal abominations is the combination of technical skill and adventurousness they display in their murderous work. And fortunately, despite the feral, lo-fi production quality of their debut, those head-spinning qualities still come through clearly enough to give most listeners bugged-out eyes, dropped jaws, and maybe rivulets of gasping slobber.

The band walk a fine line between berserker chaos and the kind of intricate instrumental inventiveness and rhythmic dynamism that produces fascination. It’s a high-wire display of acrobatics, but Funeral Chant are so nimble that they don’t lose their balance no matter how fast they’re flying along that thin cord.

And so, the songs are crushing, eviscerating, hateful, and ferocious at a primal level, but are also intricate, well-plotted, and eerie. In teh heat of the moment, they trigger an enormous adrenaline rush, but it takes multiple listens before you begin to follow all the labyrinthine exercises going on within these raging storms of sound.

In a word, this is fantastic. But take some big, deep breaths — you’ll need the extra oxygen before you’re done here."
www.nocleansinging.com

But death is a mere becoming…. What dies simply comes back under new form, and that’s why we’re fucking stoked to learn today that after several years, 4/5 of the guys in Dead Man have resurfaced with a new project called Funeral Chant, which is – of course – just as fucking spectacular, if not even more awesome, as Dead Man was. Funeral Chant are comprised of the entire final/original lineup of Dead Man, minus their singer (vocals are now handled by guitarist Voidbringer), and with former bassist Doom of Old now handling guitars, and former Dead Man guitarist Vomitor switching with him and now handling bass. Essentially the core of the band is intact and their unchallenged force preserved. In fact, you can clearly tell that within the dark and unsettling chaos of Funeral Chant‘s music there is a strong alchemy going on, and that a primordial fire burns bright within this band, shaping music that is refined, sophisticated, yet incredibly lawless.

Coming to life through a lo-fi, raw, and disembodied recording quality are six songs which harness immense destructiveness and which are yielded by primitive and evil intents. As soon as you hit play on this fucker, the EP instantly charges forth at reckless speed literally assaulting the listener. This is virulent blackened thrash of the most wretched craft – a swirling and murky hell of blind abjection that simply refused to recede or come to its senses. You can hear the echo of early Slayer (Hell Awaits and Show No Mercy era specifically), early Mayhem, early Gorgoroth, Celtic Frost, Bathory, Venom, Mortuary Drape (noticed their logo?) Kreator, Sodom and Destruction collide into a chaotic and formless massacre of swarming hatred. Tempos are usually locked into breakneck speeds, with lengthly rampages of blasting drums and shredding guitars designing passages of inhuman aggression and of scathing hostility, with the band constantly restless and nervously moving forward, headed straight for a reckless and full-frontal collision with the listener which will know no mercy nor sanity.

Funeral Chant‘s music however is not only made of speed and negativity. There is some serious musicianship shining through the slim crevices of tightly woven chaos they summon, with many passages materialized through insane tempo changes, ripping and unpredictable rhythms, and dueling guitars that design astonishing solos battling each other for complete domination – just as you’d see in bands like Merciful Fate or Judas Priest. Overall, Funeral Chant‘s is spectacular and timeless music which shows an admirable adherence to an ancient and glorious tradition as well as a modern and very personal approach to creating highly hateful, raw, and antihuman heavy metal. Funeral Chant‘s debut EP represents a truly glorious return by some seriously talented people which have been away for way too long and which needs to be celebrated with undisputed reverence.
www.cvltnation.com

This self-titled effort by the US black/death metal horde Funeral Chant is a raw, barbaric, and unsettling affair, but it possesses depth and texture, much more so than many other similar bands and artists out there who opt for an old-school sound and attitude.

The great thing about Funeral Chant is that they write brilliant songs. Explosive yet slimy riffs, hellish vocals, pounding drums, and a deeply disturbing atmosphere permeate this cursed thing, so if that sounds appealing to your tiny mind then there is simply no way around this 6-track opus. The warm, murky, and organic production adds another layer of darkness to the proceedings and at times it feels like one is being sucked into a nightmarish world from which there is no escape. This is utterly morbid and reckless black/death metal of the vilest order.

Sure, there is nothing new to what these ugly sickos do, but the songs are so engaging and captivating that stuff such as innovation simply does not matter. Funeral Chant may harken back to the days of old, but this is fucking timeless stuff and I dare say that this will still sound as current and sharp as a razor ten years from now as it does today. All you black/death fanatics ought to head on over to the Duplicate Records website and order a copy of this wicked slab of horror now. This shit is both catchy and disgusting. On top of that, it will fucking pulverize you!
www.eternal-terror.com

Norwegian underground label releasing and distributing mainly extreme metal and then some.

Bandcamp Daily  your guide to the world of Bandcamp

Tasty gems from around the world, plus interviews with Kaitlyn Aurelia Smith and Nick Hakim.