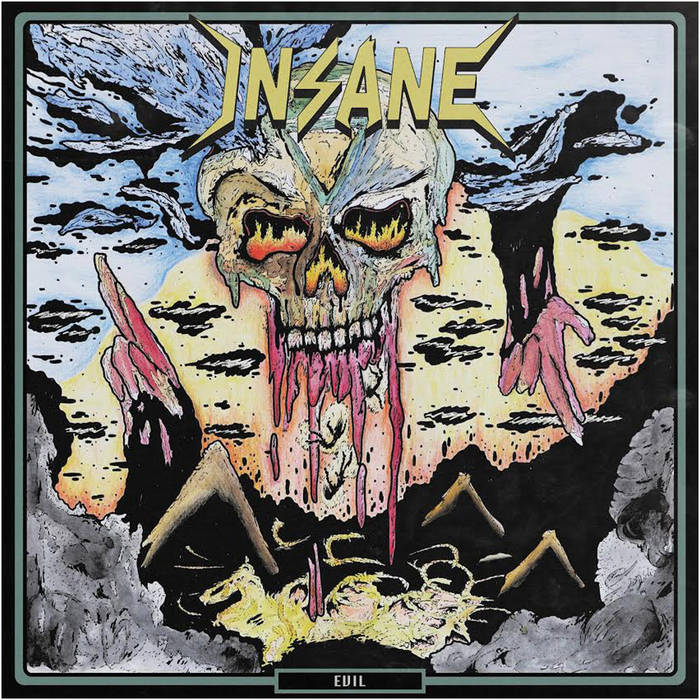 Duplicate Records proudly present INSANE!
Formed 2009 in Wermland, Sweden, thrash / speed metal fourpiece INSANE have made their mark on the underground with several EP, demo and split releases, as well as performing a string of shows in both Denmark, Norway and their native Sweden. In 2013 the MLP Interment Of Life was released and now the full-length debut, Evil is ready. INSANE has developed a sound which is best described as ripping drumbeats combined with evil riffs and raspy, angry vocals delivering hatred upon the injustice in our world.
A hefty brew of thrash, speed and heavy metal, Evil is a lot more than merely yet another oldschool release, and a fine addition to
Duplicate's already high quality roster.
Evil will be released on LP, CD and digital formats early 2017.

The lethal Swedish thrash/speed/heavy metal quartet known as Insane spat forth this ugly and intense brew of face-melting music a few months ago via Duplicate Records and I must say that I am impressed by what these fuckbags have come up with. Not only are their tunes memorable and catchy, but the musicianship is superb and the warm, organic production fits the song material perfectly. The whole thing sounds inspired and straight from the heart.

There is nothing original to what Insane offer here and it is impossible not to draw parallels to bands such as Sodom, Slayer, Destruction, and the likes, but the fact of the matter is that "Evil" just sounds and feels so right and goddamn honest that it hurts. It is impossible not to be carried away by it all. The nine fist-pumping songs that constitute the album are caustic and hard-hitting, but with wicked hooks, convincing vocals, and great riffs to them. This stuff ought to please any fan of thrash/speed metal out there!

In today's market where we are constantly flooded with mediocre releases by so-called retro thrash acts, it feels damn good to actually receive and review a proper thrash metal record that looks to both the past and the future. If these guys keep writing sharp and focused tracks such as "Ritualistic Death" and "Obsessed by Vengeance" in the years to come, then I think we can all rest easy. Thanks to Insane I now sense hope, folks. Check these scumbags and their awesome album out now!
www.eternal-terror.com

Since forming in 2009, Insane has been busy with numerous EPs, demos, splits and a mini album in 2013 titled Interment of Life, and now just four years later they are back to melt faces with Evil. This new release by these thrash monsters is a nine track release that, you guessed it, is riddled with thrashing, chaotic and angry tunes that twist your neck and cave your skull in in no time. Insane blasts off from note one and continues on their flesh burning thrash rampage at full tilt until Evil has finally concluded.

Evil starts off with Ritualistic Death which begins with a rumbling bass line that swiftly builds and builds as the drums and fierce savage riffs kick in providing you with a head banging and destructive beginning to a record that seems to have been unleashed to demolish everything in its path. Each song after the opener is just as bombastic and neck twisting as Insane doesn’t slow down one bit as they keep one foot on the gas and the other on your throat for the entirety of the record. The only place in this release where they slow down is track six, the title track where they break out the acoustic guitar for a brief interlude before ramming your skull against the wall of thrash noise once more.

Save for the brief moment of reprieve, Evil storms out of your speakers delivering crushing blow after crushing blow of nothing but burning thrash fury. Each track is a mayhem filled, high octane thrash attack that shoves you back in your seat the very second that they hit your gnarled ears. With a bombardment of razor sharp riffs, rumbling bass lines, savage vocals and acrobatic drumming, Insane provide you with a listen that melts faces and leaves you with plenty of brain damage from head banging too much. Across this nine track release you are greeted at every twist and turn with harsh and punishing tones that are undeniably heavy and head bang worthy, and before you know it you have gone through this record a fair number of times.

Evil is a solid full length debut that is wholly enjoyable. This is a head banging good time and a record that thrash enthusiasts would enjoy the hell out of.
cadavergarden.com

Well these young Swedish whipper-snappers formed in 2009 and, after a few demos, splits etc this is their debut album, and there’s quite a lot to like if you’re a fan of old school thrash metal especially when you consider these young’uns weren’t even alive when “Master Of Puppets” was released.

Their razor sharp take on traditional thrash / speed metal has been keenly honed over the last few years and the nine tracks on this album show just how tight these lads have become. The production is brilliant and is reminiscent of that on old Artillery, Destruction and Assassin releases. Organic & retro sounding but without kicking the arse out of it. The band’s speedy & precise riffing requires a certain clarity and the mix & mastering job by vocalist / guitarist Gustav Hellberg is exactly that.

There’s quite a variety on offer here from out and out thrashers (“Dark Internal”) to slower more considered numbers (“Obsessed By Vengeance”) there’s also a tasty little acoustic interlude “Evil” in the middle of the album to give your neck a rest.

Of course, being an old school thrash metal band these days means it’s difficult to bring anything original or innovative to the table and you’re consequently gonna be compared to other bands but what I like most about this record is Insane sound really genuine and you can tell every song here is played from the heart with maximum conviction. This record is a surefire winner for any thrash/speed metal fan and it illustrates that you don’t have to try and be the new Opeth (thank fuck) or Enslaved to grab the attention…… in fact I’d rather listen to Insane any day.
www.avenoctum.com

Norwegian underground label releasing and distributing mainly extreme metal and then some.

Bandcamp Daily  your guide to the world of Bandcamp

Tasty gems from around the world, plus interviews with Kaitlyn Aurelia Smith and Nick Hakim.